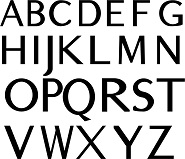 What is this font, anybody ? Looks like Optima but it’s not. Has the bar in the G, Middle vertical in the W meets at a T.

It was used in the Tunnels and Trolls 5th Edition Rules before they switched to Optima.

I’ve asked the original typesetters, they thought it was CG Omega but it isn’t.

I have searched literally through 10000+ fonts and done the whole identifont and matcherater things.

The italic set that goes with it has a single storey g and a but the main font has a double storey a and g.

I looked around but had no luck. It’s not sans serif Times. There is such a font, but this isn’t it. I haven’t found a visual source on the web of all of the Compugraphic fonts of the 80s.

There are visible distortions in some of the glyphs in your sample, such as the stretched R and the very thin X. Also, the letters are of different heights, and you didn’t show us the italics. Can you prepare a better image that includes both the roman and italic versions?

I’m still working on the italic version, I literally had to scan, cut and paste to produce this main font version:

It looks a lot like Optima/CG Omega but the bar in the G, the straighter M and the intersection of the middle vertical in the W tell me it’s not. Also the 5 has a lean. Please forgive the blue. As I dropped each glyph into FontCreator I put it in a colour group so I knew which glyph I was up to.

It’s not Beorcana because the dots are round.

It was produced by an Editwriter (7500?) phototypesetting machine.

It’s similar to MN Latin or the various attempts people have made to remove the serifs from Times New Roman.

After looking through font libraries I’ve only ever found 95% matches.

The print was produced by shining light through a film onto photopaper. The reason the image I provided is rough is because I literally cut and paste and resized those glyphs from a scan/

one of the ugliest fonts i’ve seen… please use Optima

It renders very well in print, has Optima qualities but is narrower. But it is that specific font I need for a specific purpose.