I am looking to match a font from a 1980s game, Squad Leader. I have tried abobe, fontsquirrel and what the font. Seems difficult to find a ‘4’ like this one with a Sans Serif. Help welcome, happy new year… 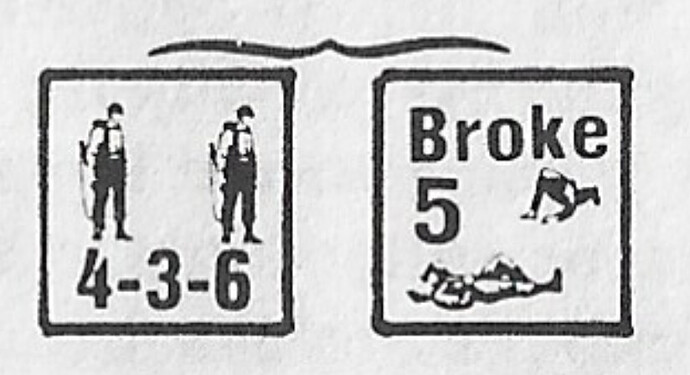 Answering my own q, found a couple closer Archivo Narrow and Pragati Narrow on whatfontis. Not quite, but close

I looked at a lot of examples of tiles from the Squad Leader game and related games, produced by Avalon Hill. It seems they used a mixture of sans serif faces for these tiles, some even on one piece. For example, the 4 above does not go with the 3 and 6 (and it’s not Archivo, which is much too new), which look like Univers Bold Condensed. The 5 does not match them. The title on the box of Squad Leader was set in Futura Display, but none of the tiles that I looked at used any version of Futura. Mostly, the lettering on the tiles looked like Helvetica and Univers (or maybe Venus, Nimbus, or URW Linear). In any event, it’s a mish-mash of faces and styles.

thanks for input; I was drawing similar conclusions. The 4 is very off in the sample. A lot looks like straight helvetica, but the orig game is more like Acumin Pro. I think of the 4 games there was some ‘variety’. I reckon I will compromise on a single font for each game for my reworks. samples at github if you are interested

Looked at Github and then went to your own site. Nice work on the recreations. This topic took me back to my youth playing the Avalon Hill games D-Day and Leningrad with my brother. They were mind-boggling complicated compared to any other board game!