My dad and I are working through a font-related treasure hunt. The image I’ve attached includes instructions for the next stage, written in a font I can’t identify. 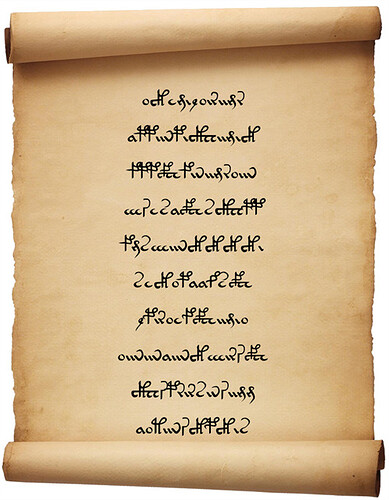 I’m guessing that the hunt designer moved the characters so close they overlap to make the font difficult to identify using online tools.

Does anyone have any thoughts about decoding the passage?

@CMSmith -​ although I am unsure of what font was used for this image, I do think that I may have discovered the script/language being used - if that would be helpful for what you need…

Try to see if the language is Telugu​.
I hope this may be useful for your treasure hunt!

But my gut feeling is that it’s Arabic.

This text is set in the font Voynich, which is a replica of the writing in the undeciphered Voynich manuscript, a 240-page vellum codex from the 15th century. The contents include sections on plants, astronomical or astrological information, and other topics. The Voynich manuscript is an illustrated codex hand-written in an otherwise unknown writing system, referred to as 'Voynichese'. The vellum on which it is written has been carbon-dated to the early 15th century (1404–1438), and stylistic analysis indicates it may have been composed in Italy during the Italian Renaissance. The origins, authorship, and purpose of the manuscript are debated. Various hypotheses have been suggested, including that it is an otherwise unrecorded script for a n The manus...

Voynich: Based on the Voynich 101 Truetype created by Glenn Claston to transcribe the Voynich manuscript, updated and corrected for UTF-8 by William Porquet Public Domain (not a license). Category: Handwriting